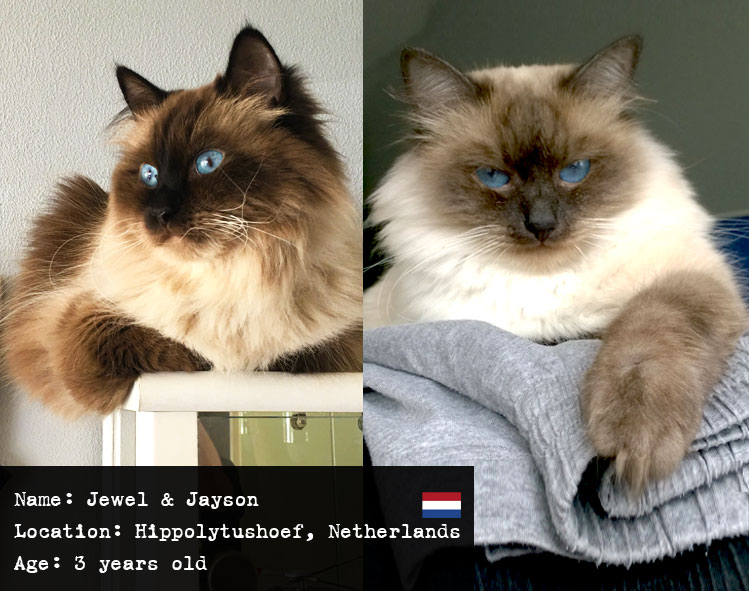 Homecoming of Jewel Justyna and later on of Jayson Jaguar

Jewel was available for adoption after she had a litter of 6 which was born on the 7th of May ’17. The breeder decided not having another litter with Jewel because it was very rough on her.

Searching for a Neva Masquerade kitten we saw Jewel Justyna where she was available for adoption and her photos at the cattery site. It was love at first sight with her beautiful deep blue eyes. We decided to go for it.

After two weeks of introducing in our house, it was time to let Jewel together with the other two cats, Rocco the Bengal cat and Kitty the stray cat.

It all went well, but after a while, the other cats sort off ignored Jewel and being outside where Jewel had to remain indoors. We wanted to contact the breeder for advice, but then we saw her brother was also available for adoption.

Yes, you probably guessed it, we wanted her brother as well. Together they would have companionship.

Bringing Jayson home with us after a separation of close two and a half months time from the cattery where they were born. At first, they were as strangers to one another. Now 6 months further we see them act as brother and sister when they play, eat and hunt together as a couple.

What are the names of your Siberians?

How old are they?

What country and city are you from?

We are living in the Netherlands in a small village called Hippolytushoef, situated in the northern part of Holland.

How did you decide to have a Siberian cat and why?

Besides a Bengal cat and a stray cat, we wanted a small kitten to live indoors as a companion for my wife after being hit by a stroke.

Being at home and feeling a bit alone where the other two cats were outside. At that time we weren’t able to get our hands on a kitten, because of waiting lists.

During our search for a kitten, we found an adult female Neva Masquerade who had a litter, but pregnancy was very hard for her and the breeder decided she would not have a litter again with Jewel.

Jewel was available for relocation.

It was love at first sight, with her beautiful deep blue eyes that look straight into the lens. When we saw the picture of Jewel, we were sold and we both knew we have to bring that kitty home.

Seven years ago when we brought Rocco (the Bengal) home after being in an adoption center, I started to get more info on cats, breeds, and their breed related characteristics.

That was the first time I saw a picture of a Seal Tabby Point Neva Masquerade cat and learned it was a subcategory within the Siberian breed. I still have that picture on my desktop. That was my first glimpse of a Siberian and I fell for it. I decided that one day I would have such a companion.

We love the wild, majestic, big muscular and fluffy appearance of the Siberian cat. They have something special, something mysterious about them.

What is your Siberians’ favorite food? Any recommendations on food for other Siberian cat owners?

Dry food they eat from Royal Canin Main Coon. Wet foods from Applaws and Almo Nature, both in the fish flavors. The Siberians here are very easy on food, I can put every kind of brand of food in front of them and they eat.

What are your cats’ favorite toys or games?

They absolutely love the rod with the rope and feather, I have to hide it in the hall. And when I bring it inside the living room, they go ballistic.?

What do your Siberians love doing most?

Jewel loves to play, she is a very active female. Furthermore hugging, sleeping, sunbathing, more hugging and lay down on your lap and eating, somehow in that order.

Jayson is lazier and not so active, but furthermore the same as his sister.

Is there a funny story you could tell us about your Siberians?

Siberians tend to lay down on their backs when they are fully trusted with their surroundings and that looks goofy but very sweet.?

When they are playing together and chasing after the other they make talking noises, especially the male Jayson makes funny noises when he chases Jewel or when Jewel chases him.

What do you love most about your Siberians?

I really do love their calmness, they are actually really cool. They have a really sweet character you can’t compare it with another breed. And their voice, so soft that sounds so sweet. I really love their vocals. They love to talk while following you everywhere you are.

Their ability to jump! Sometimes I really wonder how it would be possible they can do a particular far jump, and it always works. It always looks so easy.

What are the good sides of having Siberian cats?

They are so sweet and social to humans, it is just unbelievable sometimes how sweet they can be.

So soft and gentle when they play and touch you with those huge impressive paws.

Completely different when I play with my Bengal, I come more or less wounded out of battle.

What are some downsides to having Siberian cats?

Sometimes the hunting skills of Jewel.

Sometimes she is so extremely active you cannot leave a single paper without her playing with it (and sometimes destroys it).

This breed is well known for their exceptional hunting skills. Fish, birds, hamsters, mice or rats are not recommended to have in the same household as the Siberian.

Siberians have their crazy 5 minutes at least once a day, sometimes at a bad timing but we do not experience it as a downside.

More likely to watch and laugh because sometimes its so funny.

Do your kitties shed much and how do you deal with it?

Despite the fact that the Siberian coat is mid-length to long, they don’t shed that much.

Combing Jayson two times a week and Jewel once a week, and that works for us.

Only now they are shedding a bit more than average because of losing their winter coat and collar.

But even that is very easy, I thought it would be more work with shedding before I started with Siberians.

Do you travel with your cats? What do you do when you need to go on
vacation? (Pet sitter? Cat hotel? 🙂

When we are planning a time we ask our neighbors to watch over the cats and house.

The Bengal and the little stray cat are mostly outside in the garden during daytime and the Siberians are in a cat kennel in the same garden.

Would you recommend other people to have a Siberian cat, why or why not?

I would recommend a Siberian to households were babies and small children are involved.

They are so lovely and sweet to their humans that is just adorable.

If there are some sort of allergies with cats, try to contact a Siberian breeder and ask him/her. Maybe a Siberian is one of the possibilities.

The character of the Siberian is something I have never experienced before compared to another breed of cat.

They have the looks of a really wild cat that people would like to see on their cat, but the Siberians combine it with a soft character that is the opposite of his appearance.

Note: We do not add or change anything in our featured Siberian cat profiles and publish information exactly as it is provided by our featured kitties. We do not promote mentioned products, every product endorsement/recommendation belongs to the kitty in question and their human 🙂

Would you like your Siberian kitten or adult cat to be featured on our website? contact us at info@siberiancatguide.com. We will be happy to feature you and your lovely pet.

Hello and welcome to Siberian Cat World! This website is the world’s largest resource on Siberian Cats. We are all about this wonderful breed. I hope you can find all the information you need about Siberian cats on our website.

Want to always stay up-to-date on our articles about Siberian cats? Subscribe to our newsletter ;)

Our 2019 Siberian Cat wall calendar is now for sale!