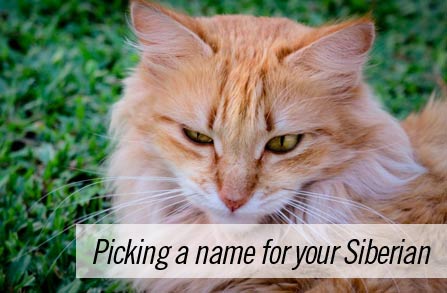 So you’ve got a new Siberian kitten – congratulations. You are probably in awe and totally in love with your new little friend.

Now you have a whole lot of new things to do, too. Like figuring out your kitty’s bathroom situation, providing them with good nutrition and entertainment, and saving your furniture from being clawed. All the fun stuff of new pet ownership!

But you likely also have one other task – naming your kitten. That’s a very important endeavour, something you only get a chance to do once, so don’t mess it up 🙂

In this article, I will talk about some general naming advice, some of the more popular and less common cat names and also names particularly for Siberian cats. As a native Russian, I would also like to give you some Russian names that you might like and that would fit a Siberian cat nicely.

Before you go looking through lists of names and start picking one, here is some advice on how to pick a name that not only you will like using (and that your cat will like) but also the name that will be easy for your cat to hear and remember.

Tip #1. Pick a name that has at least two syllables.

Trust me on this one. When you call your cat from the opposite part of the house, you don’t want to just stretch the single syllable. You know cats don’t like coming right after they are called. They always take their time. (Unless it’s dinner time). So you’ll have to do lots of stretching 🙂 Just pick a 2-3 syllable name and it will all be way less awkward.

Also, a two-syllable name will likely sound more distinct to your cat and it will be easier for them to hear you. Which brings us to tip #2.

Tip #2. Pick a name that your cat can hear well from a distance as well as up close.

Some names just aren’t that easy to hear for cats, for example, if the name mostly consists of vowels and soft consonants, for example, “Maya”, or “Leo”. Those types of names work well when your cat is close by, and your kitty will definitely hear you calling them if it’s near their dinner time.

But if your cat runs outside and you are trying to find them, a stronger sounding name may just make a difference between you finding your kitty and not. Choose a name that has harsh-sounding, strong consonants like “t”, “s”, “d”, “k” etc.

Basically just imagine yourself trying to yell the name outside in the dark. Will it sound distinctive enough for your cat to hear it from the bushes or nearby streets? Then it’s a good name.

Tip #3. Choose a name that suits your Siberian cat.

The thing with this is that you can’t really know which name will suit them until you know them for a little longer. Don’t try to pick a name for your kitten right after you bring them home from a breeder. Live with them for a few days or weeks instead, and see which name comes to your mind. Most likely, the name will come to you pretty much by itself.

In my experience, the names for all of my cats (and one dog!) just came to me a week or so after we brought the cats home. With the youngest cat, my partner and I actually thought up the same name for the cat after knowing her for a few days! The way it happens is you just observe the cat and their character, their traits and quirks, and then you just know their name 🙂

Here are some funny cat names that I like and think they could suit a Siberian. Sorry, funny names weren’t my main interest so only a few of them:

Butthead (and Beavis if you have a second cat!)

So this is basically why I wrote this article 🙂 Here are some Russian name suggestions for your Siberian kitty with translations/explanations of meaning/origin.

Misha / Mishka – both rooted from the Russian name Mihail (a.k.a. Michael in English). Super cute name for both male and female Siberian cat.

Anfisa – an old female Russian name that could fit a female Siberian cat.

Annushka – this name is for well-read cats. Annushka is a Russian name (diminutive from Anna), but it is also the name of a key character in a very popular novel by a Russian writer Mihail Bulgakov.  It’s a super cool name!

Begemot (Begemoth) – is another character from the same novel, and it’s actually a cat!

Feliks – another name for a male Siberian kitten

Fima – I actually owned a female cat named Fima back in the 90s.

Mila – a sweet name for a sweet female Siberian kitty.

Savva – a great name for a male Siberian

Vasya – originally a male name, but these days often a diminutive from Vasilisa (a female name).

Vladimir – the name of the long-standing Russian president.

So there you go. I hope these name ideas will give you something to think about and will help you pick the best name for your new Siberian kitten.

Hello and welcome to Siberian Cat World! This website is the world’s largest resource on Siberian Cats. We are all about this wonderful breed. I hope you can find all the information you need about Siberian cats on our website.

Want to always stay up-to-date on our articles about Siberian cats? Subscribe to our newsletter ;)

Our 2019 Siberian Cat wall calendar is now for sale!